What do you get if you cross a quintessential English village fete with an inter athletic club cross country race meet? You get the Harvel 5; a Hash House Harriers event consisting of a 5 mile route along country lanes and through picturesque woodland around the village of Harvel in Kent.

The Hash House Harriers describe themselves as “a drinking club with a running problem” so their events are always as much about the social aspect as the run itself. Many years ago I joined in a few Hash House Harrier runs in Dubai which entailed heading off into the desert in a convoy of 4×4’s to a designated base camp, then a group run at sunset before settling in for an evening of drinking games around a massive campfire. At some point a stack of takeaway pizza would appear to soak up an excess ‘hydration’. I have fond memories of these desert ‘soirees’, they were always really good fun. Though I suspect for most the running bit was perhaps secondary to the pizza and beer!

Harvel wasn’t quite as hardcore, although I confess I didn’t stay long after the ‘down downs’ (Hash Harrier post race ritual involving… You guessed it – beer!). It was very much a family affair with Ice Cream and WI cake stalls to keep supporters entertained while the runners were out. My wife Sarah came too with our children Millie and Ned to cheer me on. We’d arranged to meet friends Pru and Matt with their kids, Pru and I ran while Sarah, Matt and the children mucked about on the village green sampling said cake and ice cream.

800 runners set off from a well organised stabled start; signs in the grass verge grading runners from sub-30 at the front to “Finish by Monday eve!” at the rear with some more sensible target time slots in between. I shuffled myself in with the 40 – 50 minutes crew.

There were a lot of running club teams in the line up and because of that I think, it certainly felt more like a race than a local village fun run. Five miles is a distance that feels like it ought to be quite quick too and the pace seemed brisk to me. It was a very pretty route, undulating, generally inclined upwards for the first half then down to the finish. Overall not especially challenging but very enjoyable all the same. I managed to get home sub 45 mins and clocked a 5KM PB split in the process, so even though I am generally less about the time and more about the journey, I was nonetheless chuffed with that. 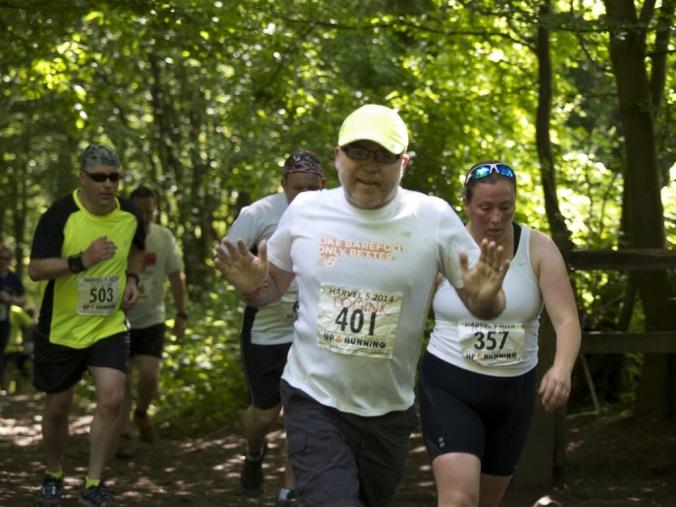 Me ‘attacking’ a hill – haha (photo by Fast2Foto)

The race was really well organised, cheery marshalls all the way round and lots of supporters too. There were a couple of water stations which is great for this distance and both served beer as well as water, yes beer! Can’t say I was tempted myself but nice to know its there if you were!

I did hit the beer tent after finishing though and a pint of Hogs Back ale put the cherry on the cake of a lovely day. We lazed about on the green for a while, it was a sunny afternoon and lots of runners, families and friends seemed happy to hang out.

I really enjoyed this run, my family had a lovely time too. Harvel Hash House Harriers were warm, friendly hosts and put on a great event. We will be back next year for sure. 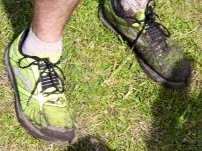 And it was also a bit muddy… (Photo by Matt Clements)

And thanks Fast2Foto for some great pics.